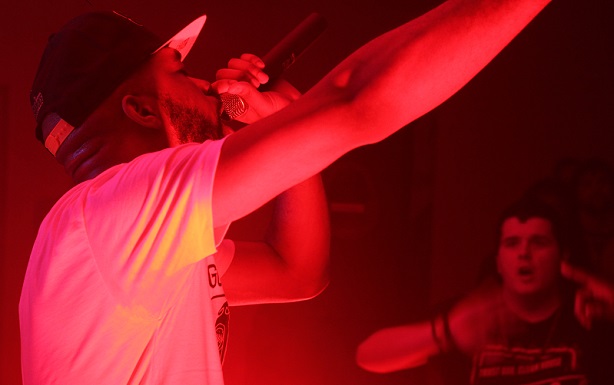 Having seen S.O. perform almost a year ago in St. Marks, London, alongside Husky, Jahaziel, Melvillous and Playdough, I was certainly looking forward to seeing the Lamp Mode signed artist again and on his first UK headline assignment.

With the upcoming Step FWD UK Top 10 Christian Chart and the national impact that was already starting to have, I had decided that putting all trust and faith in God, I was going to travel as much of the UK as possible. This was indeed a bold ‘step fwd’ but one I felt pretty certain God intended for me and somehow the plight of Abraham was stuck in my head. So it seemed Nottingham was going to be first, on the British road map to everywhere.

Trains being too expensive, National Express seemed a safer or rather cheaper option, all available funds already invested in taking ‘steps fwd’ (I really need to stop doing that but it works so well). I decided that I was going to do a Gideon and not waste money I didn’t have booking a hotel room to spend 5 hours in. The 6am coach to London was the only option to get back in time to set up for our Sunday church service. Faith in action and a little message highlighting my plight on Facebook I jumped on the train to Victoria from whence the coach would depart. It was while I was on this journey that Gabriel of Riot Records and B-FAM called to say there was a spare room waiting for me if I wanted. Ongoing whispers of thanks to God and huge smiles later I arrived in Robin Hood’s hometown.

Now in the interest of time I will skim over the glorious sun sprayed coach journey, the very welcoming downpour to greet my arrival and the delicious taste of my first Wimpy in years. Oh and as I found out, don’t ever mention that Nottingham is in the north, or the south for that matter. East Midlands is the ‘rep’ apparently. In any case I’m definitely looking forward to visiting again and seeing more next time.

Arriving at the Christian Centre I was treated to a fantastic welcome and the joy of seeing large, busy yet organised teams in service for God made me very proud indeed. Nontheless Gabriel, who was responsible for the night was as calm as ever, either because he had things well in hand or due to Charlotte’s superb management skills or both. Great showing from all the supporting artists who performed on the night, namely Hip Hope, Elijah Bee and Basics who opened the show, Moses of Manchester, Serene, Ram1 featuring with Breaker and B-FAM plus A-Star with the memorable ‘down for my brothers, DFMB’.

S.O. the headliner himself certainly outperformed my previous live viewing of him and had me remembering the magic that was at Mali Music & Friends in London last year. There was a warm friendly vibe and a professional yet intimate feel to S.O.’s entire delivery of older and new material. His passion for his craft was on display and he had the crowd singing along throughout. All together a really great night that Nottingham will certainly remember for some time.

Event concluded, interviews wrapped up and after hours of discussions at the house about Christianity, tithing, prosperity, football, Tom & Jerry, He-Man and other random topics, soon it was time to catch the 6am coach back to London. Thanks to Gabriel and his brother Joseph for providing a place to rest and to everyone that made such an enjoyable experience possible.

S.O. next stop London on February 23rd. Not much need for a road trip for me then. What about you?