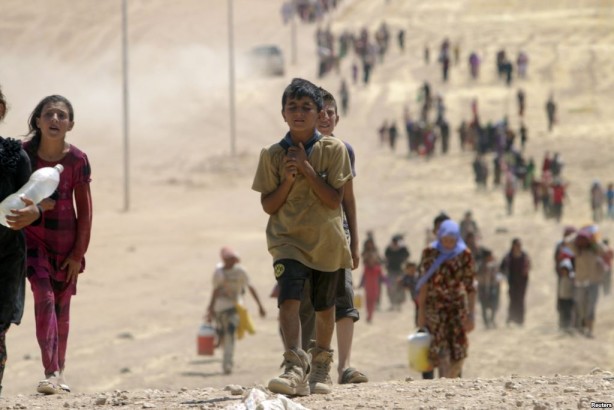 UN BAJID KANDALA REFUGEE CAMP, Northern Iraq — It looks like a scene out of the Bible — a modern-day exodus.

Tens of thousands of Yazidis made the 100-mile trek from Mt. Sinjar all the way to the United Nations refugee camp on the northern border. For some, it was a two-, three- or even four-day journey. Most of them came with just the clothes on their back.

Out of the multitude, each one has a story.

When ISIS, the Islamic State, attacked Sinjar, a home to most of the Yazidis, Guli Udayda — a name that means “God giveth” — said it felt like the end of the world.

“When they [ISIS terrorists] came, they caught some people and kidnapped beautiful girls and took them away,” Udayda told CBN News. “We escaped. The ones that stayed ISIS killed.”

When they reached Mt. Sinjar, her son went back for food. ISIS captured him, shot him, gouged out his eyes, and beheaded him. His friend buried him.

The long mountain trek had its own horrors. Fluce Khadr Anun used a cap from a medicine bottle to keep her children alive.

“I gave my children a drop of water every hour. The water was very far away,” Anun told CBN News.

The Yazidis who escaped from Mount Sinjar walked some 100 miles through the desert before reaching a desert road. They crossed the Tigris River and kept walking up the road on the other side till they reached the U.N. camp.

Khadr Anun arrived just one hour before CBN News talked with him.

Twelve-year-old boys, like Tasim and Rezyen, saw things that are likely to haunt them for the rest of their lives. Rezyen remembers the mountain.

“Many kids died on the mountain because there was no water,” Rezyen said. “We escaped from ISIS because they wanted us to convert to Islam or be killed.”

“I was there when ISIS came and shot one girl with a bullet in the head because they told her to convert. She refused and they killed her,” Tasim recalled.

Everything that is currently happening with the ISIS and Yazidis and Christianity is a bibilical prophecy that must come true. Jesus said many times that we would be prosecuted and even killed for his names sake. He even said “And because lawlessness will abound, the love of many will grow cold”. All we can do is remain in faith and wait for the coming of our Lord Jesus.

Let us continue to pray for all those affected in these difficult times.