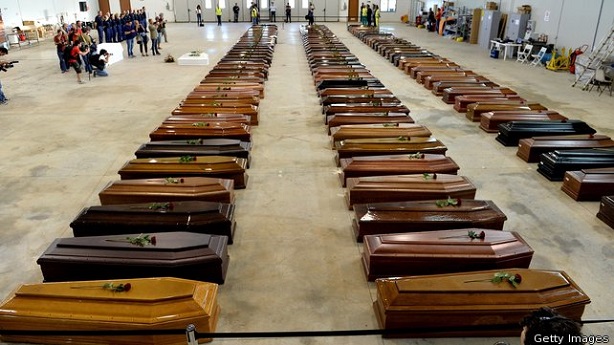 Yesterday there was a state funeral being held in Italy in honour of those who lost their lives attempting to land in Italy and create a better life for themselves.

Of more than 500 people who had been on board the boat, mostly from Eritrea and Somalia, only 155 survived. Divers have recovered 302 bodies from the wreck after the migrants vessel capsized close to the island of Lampedusa last Thursday.

This tragedy is horrible in that the victims felt the only recourse they had was to leave their homes and go to a foreign land, away from everything they knew.

Why people flee Eritrea and Somalia
Eritrea:
UN says 3,000 people try to flee each month
Human rights groups say the country is becoming a giant jail, with some 10,000 political prisoners
Young people conscripted to army – sometimes until age of 40
Somalia:
Much of the country controlled by al-Shabab Islamist militants
Country ravaged by two decades of war

At the same time, politicians across the globe from Australia to the UK are attempting to tighten their border controls with much tougher restrictions on who can enter their countries.

But is it really theirs? Is this world not God’s? Whatever happened to loving thy neighbour? Your thoughts!