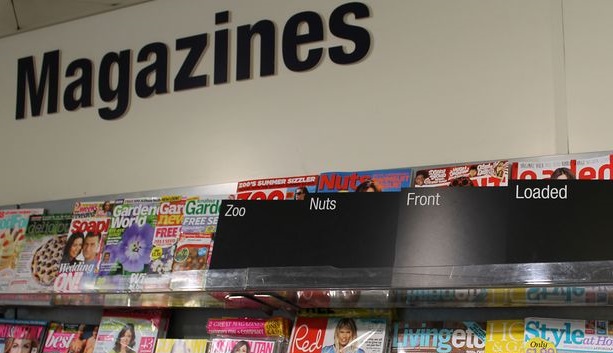 Tesco struck a ‘modesty’ deal with lads’ mags Zoo, Nuts and Front over front covers Three so-called lads’ mags have agreed to tone down their cover images and now will only be sold to over-18s in Tesco stores, the supermarket giant has said.

Zoo, Nuts and Front have told Tesco they will produce “more modest” covers in future, while Bizarre’s publisher will supply the magazine in a bag. Tesco said the move came after it held talks with its customers. Campaign group Lose the Lads’ Mags said it was a “half measure” and urged shops not to sell “sexist publications”. Its protests have been targeting High Street supermarkets and newsagents which stock the magazines, which traditionally have featured images of scantily-clad women on their front covers.

Tesco, which has about 3,000 stores in the UK, said it would ensure the magazines are also placed on the back tier of the magazine shelves so that the cover is obscured with only the title visible. A Tesco spokesman said: “We have had in depth conversations with our customers about this issue and we’re putting new measures in place based on what they have told us they want. “We’ve listened carefully to the concerns raised by the campaign groups but our priority is to make sure we meet our customers’s needs and expectations. To do that we have secured agreement from the publishers of Zoo, Nuts and Front that their magazine covers will be more modest from now on.”

The spokesman added: “We are restricting the sale of these magazines to people over the age of 18 to reassure parents who do not want their children to be able to purchase these titles.”. Tesco’s announcement comes after the Co-operative supermarket told publishers of the magazines to cover up their front covers in sealed “modesty bags” by 9 September or be taken off sale in its 4,000 stores. In July the Co-op also introduced opaque screens for lads’ magazines on some shelves.

The Lose the Lads’ Mags campaign group say the magazines portray women as dehumanised sex objects and “fuel sexist behaviours and attitudes that underpin violence against women”. In response to Tesco’s announcement, spokeswoman Sophie Bennett, said: “Tesco has been forced to act because of the thousands of people who have protested against their sale of sexist, harmful lads’ mags.

The magazines will still be sold in the retailer’s 3,000 UK stores but they will be placed on the back tier of the magazine shelves so that the covers are obscured, the BBC reports. The supermarket chain is also imposing a ban on the sale of the magazines to under-18s “to reassure parents who do not want their children to be able to purchase these titles”.

What are your thoughts on this? Should the campaign continue to apply pressure on these lads’ mags and big chains or is this a reasonable compromise?