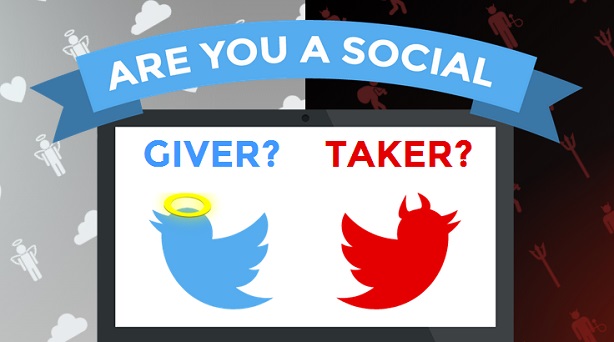 A survey by a charity fundraising platform has revealed that Britons’ online activity is where they are most likely to display their worst personality traits, with obsessiveness, selfishness and jealousy the most likely traits to be exaggerated in the digital social realm.

An online shopping fundraising platform has conducted a survey to find out more about Britons’ social media behaviour as part of wider consumer research into online habits, to investigate which aspects of their personalities are displayed most in social interactions which take place in the digital realm.

The survey follows the launch of the new microsite www.giverortaker.co.uk, which evaluates the selfishness of users’ Twitter behaviour to generate a tongue-in-cheek profile and either a ‘Giver’ or ‘Taker’ verdict. Give as you Live (www.giveasyoulive.com) polled 1,875 British citizens, all of whom were aged 18 or over and had active social media accounts which included both Facebook and Twitter. All respondents updated their social media at least three times per week.

The survey initially asked respondents, “Do you ever behave on social media in a way that you would not behave in real life?” to which more than three quarters of respondents, 76%, confessed that they did. When asked to provide specific details on the behaviour they had displayed online which they wouldn’t have in real life, the top answers were ‘send overtly flirtatious messages’ (61%), ‘make horrible comments’ (58%) and ‘befriend / follow people I don’t really like’ (57%).

In order to investigate exactly which personality traits were most likely to be exaggerated or revealed online, the survey then asked respondents to identify any traits they felt they displayed more in their digital behaviour than they would in real life. The top ten traits were as follows:

When asked why they display these traits more on social media than they did in real life, 54% of the relevant respondents said it was because they were ‘less aware of consequences’ when browsing on social media, whilst 13% agreed that they ‘care less’ how they appeared online than in real life’ and 12% felt it ‘doesn’t matter’ what they say or do as ‘it’s not real life’.

Three quarters of respondents, 75%, confessed that social media can ‘sometimes bring out the worst’ in their personalities and 61% confirmed they had felt remorseful of their social media activity in the past. When those taking part were asked to estimate how many of their Facebook friends or Twitter followers they knew in real life/had met, as a percentage, the average answers stated were ‘60%’ for Facebook and ‘10%’ for Twitter.

Steff Lewis, Head of Communications at Give as you Live, commented:

“These results are shocking! It seems many of us are using and abusing our social media channels. For some reason, social media certainly brings out the worst in us, which not only makes us look bad to our friends and tweeps – but also makes us feel bad when we log off! Perhaps people are more likely to act differently on Twitter because they know far fewer of their followers in real life so those people won’t necessarily know any different.”

“Our Giver or Taker site is all just a bit of fun, but perhaps it could mean more than that if it gets the British public thinking about their activity online. After all, people can change! There are many ways to feel better about your online activity. Sites like Give as you Live offer online shoppers an opportunity to donate to charity without any additional cost to themselves when they make online purchases. Little things can make all the difference. Before you know it, you’ll be a Giver and feeling far better about logging on!”

Article as published on Sorted Magazine