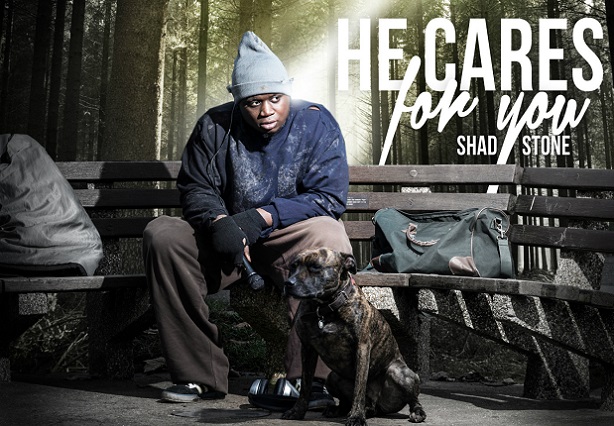 Singer-songwriter SHAD STONE (also known as DJ, Nana Kay) is a young, animated, energetic and powerful artist. SHAD STONE has just released his independent DEBUT EP, He Cares for You.

A commanding performer, presenter, DJ, actor and motivational speaker, SHAD STONE is an artist in all of its meaning, using his passion to inspire people and most of all deliver a universal message. The young born again Christian shares: “My music is written and performed to inspire others. Coming from the streets at 19, I had a life-changing experience. Seeing who I was then who and where I am now moves me. My journey encourages me to let the world know that whenever we feel alone in our circumstances, there is something bigger than us, never giving up on us”.

The Ghanaian-British artist quotes his musical influences as some exceptional artists like Stevie Wonder, Boyz 2 Men, Omar, Michael McDonald, Kurt Elling, John P. Kee, Donnie McClurkin, Fred Hammond and Marvin Sapp. SHAD STONE’s distinctive and somewhat husky tone brings an especially unique sound to the UK music scene. Within the past decade, the 2009 Male Gospel Voice of the Year finalist has worked as a session and backing singer across genres with Jaz Ellington, Egypt, Sophia Romain and Crazy Cousins to name a few. Also appearing on TV featuring as entertainment for Celebrity Come Dine With Me Christmas Special, live backing vocalist on Daybreak and Channel 5 with Dappy (N-Dubz) performing No Regrets; Sky 1’s League of Their Own backing choir and most recently on Series 7 of Britain’s Got Talent, reaching the semi-finals as a member of Gospel Singers Incognito.

Now the long-awaited EP has hit the world. He Cares for You is an incredible collection of distinctive lyrics and unforgettable melodies filled with honesty, insight and emotion. Songs include Save Me, I Surrender and the title song, He Cares for You. The EP features multi Award Winner ‘Lyrical Soldier’, UK vocalist Michaela Mathieu-Marius and USA’s Finest gospel artist William Demps. The respective tracks impart the strong distinctive sound of each of the producers: Marc Morrison and of course Luke ‘GKiD’ Grant (producer of Faith Child, Writeway Music, Jahaziel and MOBO Nominees Bobby Bovell & Guvna B).

To check out upcoming shows or to hear a sample of SHAD STONE’s debut CD, check out his Website. You can also interact with him on Facebook or Twitter

So what are you waiting for? Click image below and purchase ‘He Cares For You’ off iTunes today!