On Premier Gospel radio yesterday, UK rapper A Star announced his first live headline show on April 17th at the O2 Academy Islington and from the response it may very well be the most anticipated by an urban act so far this year. Named support so far are rap trio Hope Dealers and acclaimed veteran Melvillous.

A Star is no stranger to the spotlight, especially after his famed track DFMB (Down For My Brothers),  racking up an impressive rotation and quickly becoming an anthem with multiple remixes both here and abroad. His Revolutionary EP made it to No. 4 in the Official UK Christian & Gospel Chart and the iTunes Hip-Hop Chart and further established him in the UK scene.

With momentum growing rapidly, it came as little surprise that the rapper made history when he was the only UK artist named in Rapzilla’s Freshmen of 2016, joining a prestigious annual list which includes Andy Mineo, KB, Bizzle and S.O. to name a few. Rapzilla commented that A Star‘s “aggressive flow… as well as his accent and grime influence, have given him a recognizable voice in Christian hip hop.”

With multiple astepfwd.com publishings featuring the rapper, including our Ones To Watch 2016 listing, we were very excited to learn about A Star‘s upcoming live concert. And with the UK in the afterglow of fantastic shows from S.O. in December, Guvna B in January and Faith Child this February; Easter allowed, the timing could not have been better.

When asked what it’s been like to organise his first live concert, A Star said, “Am still buzzing from the Premier radio session and the announcement last night so haven’t really slept yet. As an independent artist it isn’t easy when you’re doing everything yourself but thankfully over the years I’ve been able to watch and learn from others in the scene and see how they plan. Am very excited for April 17th. It’s gonna be a good show!”

Another noteworthy point is that similar to Faith Child Concert’s up & coming artists Alex E & Tess, A Star has named emerging group Hope Dealers as support acts. And not forgetting Melvillous, who although not quite a newcomer, is amazingly talented so it is great to see him visibly active again.

If every future show followed this simple yet important development strategy of bringing through new/young talent or both, then hopefully our Young Artists, Where Are They? question will be answered with a more resounding response.

Click on image below to purchase tickets (on sale from Fri. 26th Feb) as this could very well be a sold out event! 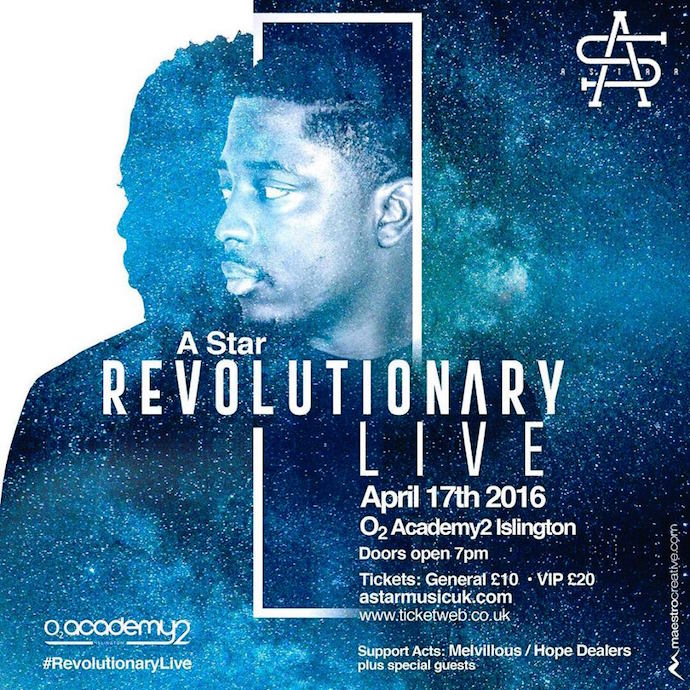