Romans 12: 10 and honouring was at the heart of the inaugural Step FWD Awards and so a number of Outstanding Contribution recipients were honoured on the night. These amazing individuals have made outstanding contributions to the UK Christian & Gospel music industry and were recognised accordingly.

One such Outstanding Contribution Award recipient was Muyiwa Olarewaju OBE.

Muyiwa Olarewaju OBE is a singer and songwriter who mixes traditional gospel music with elements of world music (from Africa, the Caribbean and Asia), soul, RnB and pop. He is also an experienced performer, broadcaster and presenter. In 2009 he became the first-ever international act to perform on America’s popular entertainment channel, BET, for the prestigious annual Celebration of Gospel show. He has presented the Turning Point programme to an estimated global audience of 70 million. With his group Riversongz, he sold out Indigo2 at the O2 in London, the first gospel act to do so, and he has played at the largest gospel music event in the world, The Experience, attracting a 500,000 strong audience.

The man we know as Muyiwa Olarewaju OBE is a British Gospel artist of Nigerian origin. In fact, his full name is Oluwaleomueleyiwa Adebayo Olarewaju Ishola Omu Erin Ti Jogan Ola and at public speaking events when asked to introduce himself to a captivated audience you get the feeling that he expresses his name of birth with pride masquerading the intention to generate humour, and it never fails.

Director of Premier Gospel Radio, his recent Step FWD Award will no doubt be carefully placed beside a respectable number of other symbols of achievement in his trophy cabinet. His recent journey to Buckingham Palace for his Order of the British Empire (OBE) medal pulled in gospel experiences that appeared on the UK Gospel radar post-millennium. In fact his influence, marketing skills and sonic experiences I believe became the catalyst behind the rise of the UK African Praise and Worship scene. Songs such as Declaring his Love and Declaring his Power soon became standards across the globe.

An extreme climate shock on arrival in Britain from West Africa soon made him realise that he needed to add some heat to his life in order to prevent both physical and spiritual frost bite. The music business and media route was the answer and he went on to graduate from the University of Westminster, London.

Washington DC based American writer and publicist Bil Carpenter of Capital Entertainment ensured that Muyiwa was one of the entries in his book Uncloudy Days: The Gospel Music Encyclopedia. A few years later the subject of his research became the first UK Gospel artist to appear on the US show Celebration of Gospel the prestigious annual event that pays homage to America’s Gospel music heritage. A citation and illustration of the great man also appeared in British Black Gospel: The Foundations of this Vibrant UK sound published in September 2009.

The body of work accumulated by Muyiwa is quite impressive and leads the way in a niche market. Album and video-based projects with his backing choir Riversongz have sold a respectable number of units. When he speaks, the tone makes you realise instantly why he had no trouble finding projects in the voice-over industry. Collaboration with a German airline company, a Ukraine tour and a plethora of national TV appearances have all created, like his trademark collection of scarves, a colourful and vibrant CV.

The latest award captures the visible ‘tip of the iceberg’ story of the man who emerged out of the cold, to become Britain’s most respected amongst the rapidly emerging Gospel Celebrity market.

You can view videos for other recipients including Howard Francis, Tony Cummings, Karen Gibson MBE and Noel Robinson. Visit the stepfwdawards.com website for a full listing of music awards winners and honorary awardees. 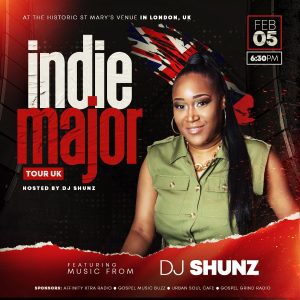