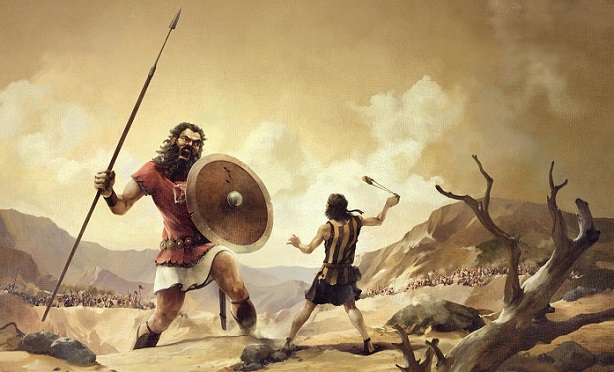 ‘Then he consecrated Jesse and his sons’ (1 Samuel 16:5). Not yet shaving, voice barely broken, knee-high to a grasshopper, yet it was David, not his hairier, tenor-bass voiced, older brothers that had the bottle to battle Goliath. Why?

Because:
1) His brothers were bottlers. When Goliath started ranting, soldiers shook in their sandals. David’s brothers saw a big noise rather than a big God. A lesson for us all, do we see big problems that will grind us down, or do we see a big God that will build us up?

2) His brothers had no previous battles. There’s nothing insignificant on our ‘God CV’. Our little battles equip us for big battles. The lion David killed as a boy was big, the bear was bigger, Goliath bigger yet. But David wasn’t about to bottle it over this latest overgrown grizzly, saying, “The Lord, who delivered me from the paw of the lion and…the bear…will deliver me from the hand of this Philistine” (1 Samuel 17:37 NKJV). His past was shaping his destiny.

3) His brothers had beauty not bravery. “…the Lord does not see as man sees; for man looks at the outward appearance, but the Lord looks at the heart”‘ (1 Samuel 16:7 NKJV). Even today, we’re still impressed with muscle or make-up, but real history-makers have it sorted in their core. The lives of frail old Mother Theresa or scrawny old Mahatma Ghandi and many others prove it (google them and see!).

Today God still uses ordinary people he wants to use you. Let Him bring out the David or better yet The Christ in you.